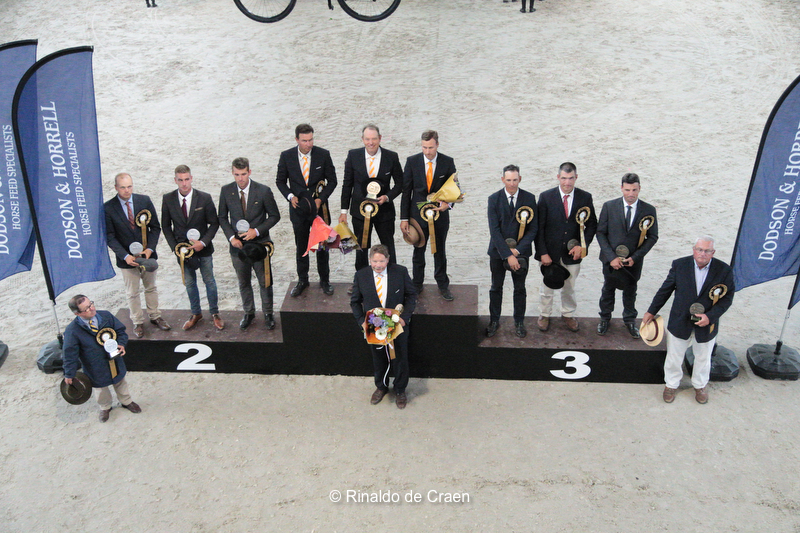 Host Boyd Exell and Lars Schwitte won the four-in-hand and pairs event respectively at DVI Valkenswaard. Although there was thunder in the air, the weather gods were on DVI’s side during the cones competition. The Nations Cup was won by the Dutch team consisting of four-in-hand drivers Koos de Ronde, Peter de Ronde and IJsbrand Chardon ahead of Belgium and France.

The public enjoyed today’s programme, which offered great sport, excitement, beautiful combinations, a course that was built with care and shopping in the many trade stands. It was not easy to finish the course, which was built by Jeroen Houterman, without faults and within the time allowed. The course was decorated with flower boxes, offered by Boyd Exell, that were placed at artful places. The first ball was sometimes already rolling at the first gate, which was difficult to approach from the starting line. In addition gate 20 was a difficult one and several driver lost a high placing in this last difficult line.

Pairs: win for Sanny Hagen-Dijkhuis in cones competition
Sanny Hagen-Dijkhuis, who took 20th position in the standings after the dressage and marathon, was the first to complete the course without knocking down a ball. She only had a small time penalty. Germany’s Adolf Fischer was also clear, but he needed more time. Tristan Verheijen and Geert Dijkhof took risks to reach a spot on the podium. They finished within the allowed time, but both had a ball down. In the final standing Dijkhof climbed to second place and Tristan Verheijen to third at the expense of Belgium’s Sven Stuyck and Adolf Fischer. Belgium’s Wim Verheylen was eliminated because he did not go past gate 13.

IJsbrand Chardon wins cones competition four-in-hand
The four-in-hand drivers also had difficulties that resulted in faults. IJsbrand Chardon won the competition with a clear course and only a small time penalty, followed by Edouard Simonet, who was also clear but needed a bit more time. In the final standings the finished runner-up and third behind Boyd Exell, who could finish his course with only one knocked down ball at gate 20 and a small time penalty. France’s Sebastien Mourier was the only driver that finished within the time allowed, but had one ball down.